Although sometimes we spend a lot of time with the locals, we rarely have the chance to know their traditions and stories.

Yesterday we had a very special day with one of the locals from Bali, Gus. 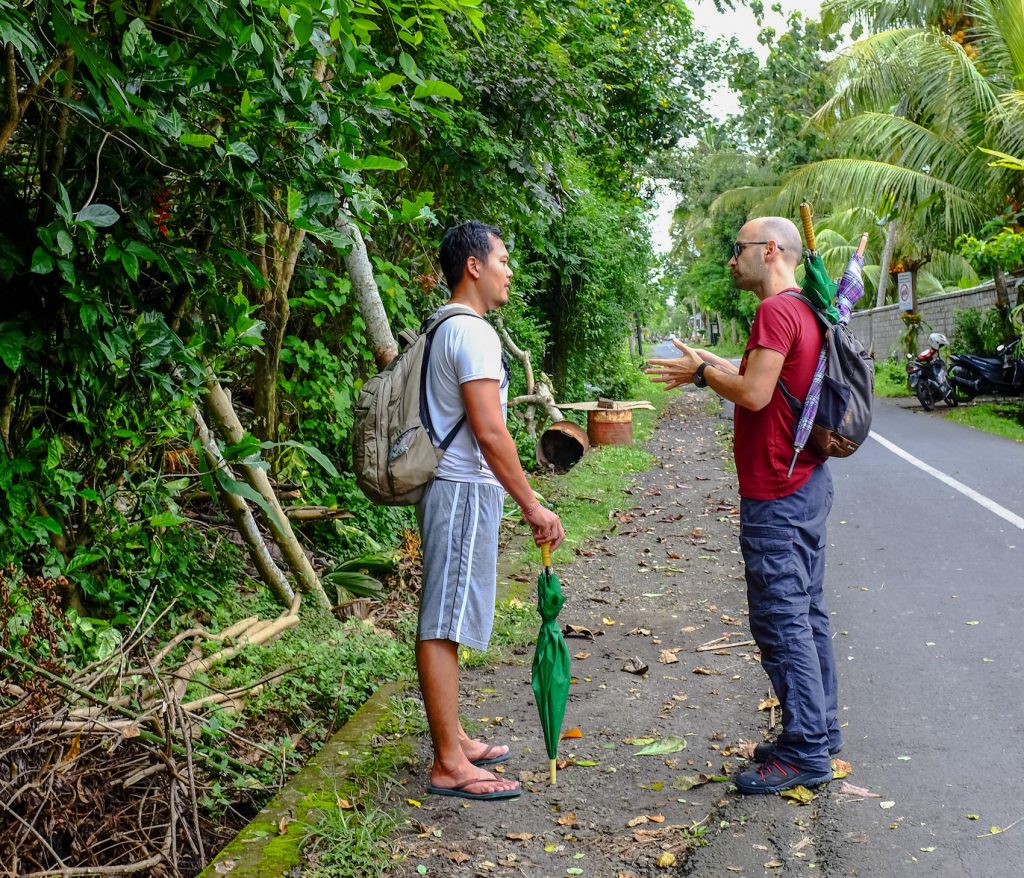 We met Gus at the hotel where we stayed, Ubad Retreat, which he runs together with his family.

Gus has a large family, and its members live together, several generations in the same compound. He gave us a tour for a few hours to get to know the village where he lives and to find out its story.

The first place we visited, located 10 minutes from the hotel is a shared bath place. In Bali, some people still have the custom of going in the morning and evening to take a bath together. Men and women of all ages gathered to make a bath naked by the river. It is a tradition that is still preserved today. As strange as we may see it, it is absolutely normal to them, is a tradition that lived through time. Many of those who come here have their own bathrooms at home, but they continue to frequent the common bath for socializing with the others. The places are hidden in the jungle and away from the eyes of the tourists. However, Gus tells us that we can also take part, the only conditions being to not take pictures and take the bath naked with them. Now the river is dirty because of the rainy season, so people use the spring water from the pipes.

The rice fields, the place where the family’s food comes from

Our next stop was on the rice terraces of the Gus family, located a further 10 minutes from Ubad.

The whole family works the land, and the production is shared among its members. Gus’s aunt was separating the rice from the chaff and his grandmother was assisting her. In the rainy season, the land is very slippery on the terraces, but that does not seem to be a problem for his uncle who comes here daily and crosses the land to feed the two cows that they keep near the fields. He’s old, he does not speak English, but he knows the language of the smile. He smiles with all the teeth he has left. He is chewing tobacco, a habit of the elders of the place.

Hinduism in a Muslim country

From the rice fields, we went to an ancient village temple, that it is very well hidden in the vegetation. Here Gus tells us about Hinduism, their religion. Indonesia is a Muslim country, but in Bali the main religion is Hinduism. The Hindu beliefs are very well passed down from one generation to another. They believe there is a god, without form or face, that there it is something above us, a divinity. Besides this belief, they are in contact with nature and they believe there are energies in the Univers for everything. Their statues represent the image they were able to give to these energies. Several times a day offerings are given and people pray and thank the universe.

The ancient temple is hidden in the jungle

We go further and walk through the village until we reach the mushroom-covered steps, in the jungle. We have the impression that we are going to another world, a peaceful one, with lots of vegetation, where calm is the main feeling. The great nature left us speechless. We went to see an ancient, but very simple temple where nowadays people come to pray only at ceremonies. We went down many steps and found the temple. Those holes you see in the stone are places where people used to meditate. Around them is just the jungle, the river and the water flowing on the stone walls. Gus tells us that in that river he learned how to swim. During those days the parents used to bring their children there and let them go into the water without teaching them beforehand. He proudly informs us that both he and the other children have done a good job and they all managed to swim.

The traditional family in a modern world

The last stop is at his family’s traditional house. It’s not unusual in Bali that when you see the gates of a house to get the impression that you’ve reached a temple. That’s what I thought, too, and I asked him if I should cover myself with a scarf, which is a normal thing to do here. He was amused and told me it was his home. We walked into a square courtyard, one of his aunts welcomed us with warm tea and we sat down a bit, just to feel the place. Several men in the family were paving a part of the yard. Here we learned the most about the Balinese families.

There are several buildings in this yard, each with its own specificity. The land where the homes are built is considered to be similar to the human body. The most important part is the head that in this case is the temple of this place. Each house has a temple that is celebrated every six months when a priest comes to bless the place. It is a ceremony to which the whole family attends. Gus tells us that in Bali every day there are such ceremonies, as the feast of the temple differs from one house to another. Next to the temple is the house of oldest generation in the family, in this case, the grandmother’s house where the wealth of the family is kept, which does not consist of gold or money but objects or books that have been passed down from one generation to another.

The other houses are built when the family grows. There are 16 people in this family leaving in the same yard. The kitchen is common, but they do not have a place to eat together, this is only the case for holidays. What’s in there can be used by everyone. When building something, as it happened when we came, all the members participate. There is a meeting beforehand, where they discuss the necessity of the thing/repair that has to be built or done, and if everyone agrees, the costs and the time are equally shared among all the members of the family. If two or more members argue or do not talk to each other, they still work together and share the expenses.

Since only government workers have retirement income, it is up to the family to take care of the elderly.

The land belongs to the village, not to the family. They do not have documents for owning it, they have no right to sell it, they only pass it from one generation to the next. If a family member commits a crime or any other demeaning deed, the village can send away the entire family from their home and from their community.

This was our last stop before we went back to retreat.

A few years ago, Gus was working in a luxury Bali hotel but he decided to quit his job and to run a family hotel where guests could feel at home. He has created jobs for his family members, depending on the skills each one of them has. He tells us with emotion that before they were poor because they only worked the land. It’s not easy to work with the family, especially with those who are older than him and to whom he owes respect, according to tradition and customs, but so far it has gone out well.

Ubad means medicine, but in a spiritual, not in a pharmaceutical sense. It is the word from which Ubud derives, the best-known place in Bali. For Gus, this cure was giving up a stressful place of work and involvement in his own project that would bring his family together and create jobs for them.

Gus considers that it’s not a coincidence that we are here, so maybe that’s why this place has a magic charm.

Don’t forget to subscribe to our newsletter. Easy for you and very useful for us.

Check out our travel resources and take advantage of our discounts.

This site uses Akismet to reduce spam. Learn how your comment data is processed.